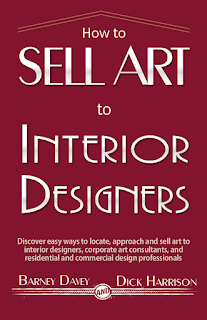 JUST RELEASED! Now you can Listen and Learn while you paint or draw. This is multi-tasking at it's easiest and most enjoyable! Every artist I know wants more time at the easel or drawing board. But they know learning to market successfully is where 50% of their time should be spent. For more than 20 years I sold $250,000 worth of art every year to Interior Designers, Decorators and Architects. And because I'm also an artist I often sold $25,000 - $30,000 worth of my own art, while representing fine art publishers and artists just like you. My co-author, Barney Davey, is the most published, watched, listened to, and mentor for artists. He has decades of hands-on experience in every phase of art sales. He's the go-to expert in on-line sales and social media. Between us, while you listen as you create, we'll give you the tips and tricks you can follow to reach what I call the Market Artists Often Overlook! These are art hungry, repeat buyers who must buy art to satisfy their clients. We've travelled thousands of miles to hundreds and hundreds of art buyers.Best of all, when you have this Audio Book from Audible, you can listen anytime at your convenience. The information is invaluable and the professional narration is superb. This is a Winner you should have!

JUNE 19 - 22, 2018 - AND SO IT GOES
Not much going on here in Nokomis as I eagerly await Turn-On-Day, now just 5 moons away as Nokomis might say. Nokomis was Hiawatha's grandmother. As in:
By the shores of Gitche Gumee,
By the shining Big-Sea-Water,
Stood the wigwam of Nokomis,
Daughter of the Moon, Nokomis.
Thanks to Henry Wadsworth Longfellow. Lake Superior is The Shining Big Sea Water. I guess Nokomis got tired of the cold and white stuff. Like so many other Michiganders she headed south and ended up here. Good choice, Girl!
I'm still following the First Two Weeks Post Op instructions even though I feel as if I could easily be on my usual schedule. I did phone the Hearing Center and asked one of the doctors if I could resume my exercise program - at least the Silver Sneakers three-days-a-week. Any of the exercises can be done sitting down, with or without hand weights or stretch bands. All the movements are in time to music, four/four time. I don't hear the words or music, just the beat. It will be a new experience for me to be able to catch the tune.
The answer was No! And of course, the swimming pool is a No-No until stitches are out and incision healed.
I'm following orders - kind of. Some of the restrictions are impossible. "No nose blowing for a minimum of two weeks." Oh - come on with that. Tulane University says that, on average, a person produces about 1.5 liters of mucus per day. 1.5 x 14 days equals twenty-one liters which is a little over five and a half gallons. Some of that has got to exit through the nose.
When you gotta blow, you gotta blow. Just do it gently and press the little flap of flesh called the Targus against the opening into the ear. Stops the pressure out. I think that's what the instruction is all about.
There are restrictions on lifting, bending stooping. Don't lift more than ten pounds for six weeks after surgery. Walking is good. Does that mean don't bend over to tie your shoes?
I am walking, but doing it at the Y in the shallow end of the beautiful pool. The resistance walking in the water provides a plus. Then a relaxing soak in the luxurious hot-tub spa next to the fountain and coconut trees.

Following orders – kind of - is not so bad.
Just inside from the pool, there is a comfortable seating area next to the snack bar. There are four profoundly inviting leather sofas there. After exercise, I often stop to read the newspaper. At least until the paper drops from my hand and I realize I've been reading with my eyes closed.
It's also a favored place for students from The Sky Academy, a top rated, charter middle school operated by the Y, to relax between or after classes. Every kid from elementary school on has a "smarter" phone. Same as their parents carry - but "smarter" than the parents. I watched a couple of the young ones sitting silently on the lounge opposite, one at each end, each intent with phone in hand. No conversation except an occasional glance and smile if one of the other looked up from the phone.
It was then I recognized there was a dialogue going on. They were sitting not quite a yard apart texting one another. No ears necessary. I think it should be called Anti-social Media, don't you?

Posted by Dick Harrison at 4:57 PM No comments: